Which States are the Busiest for Holiday Travel? 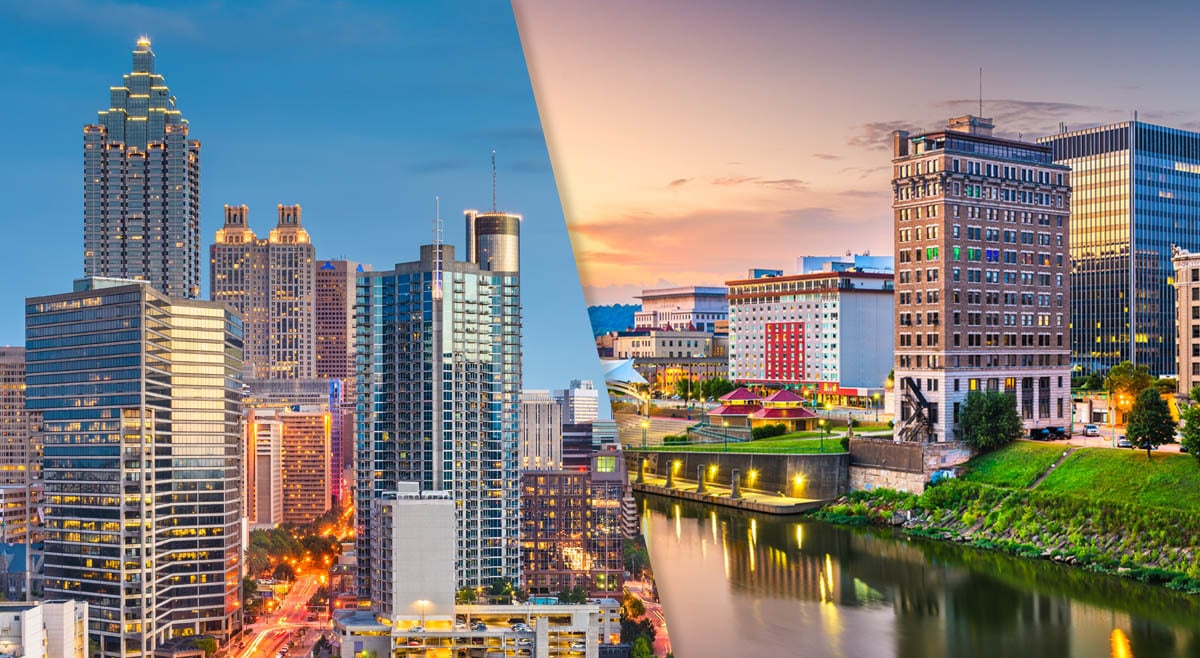 With travel restrictions continuing to ease around the United States, many travelers are planning trips to visit family and friends during the holiday season. While it is common practice for travelers to check the traffic report before leaving the house, there may be a better way to prepare for your trip. Like with many travel instances, a bit of preparation can save a great deal of hassle, and extra education may help inform travelers which states may take extra time when passing through.

The team at InsureMyTrip has identified the busiest and least busy states for each form of travel: air, rail, and road. In the U.S., the 2021 Thanksgiving Holiday Weekend saw travel volumes that approached those from before the pandemic. Using this as a source, we reviewed data from the last five years to give a more accurate representation of how travel may be affected through the rest of the holiday season, allowing travelers to better prepare for the journey ahead. 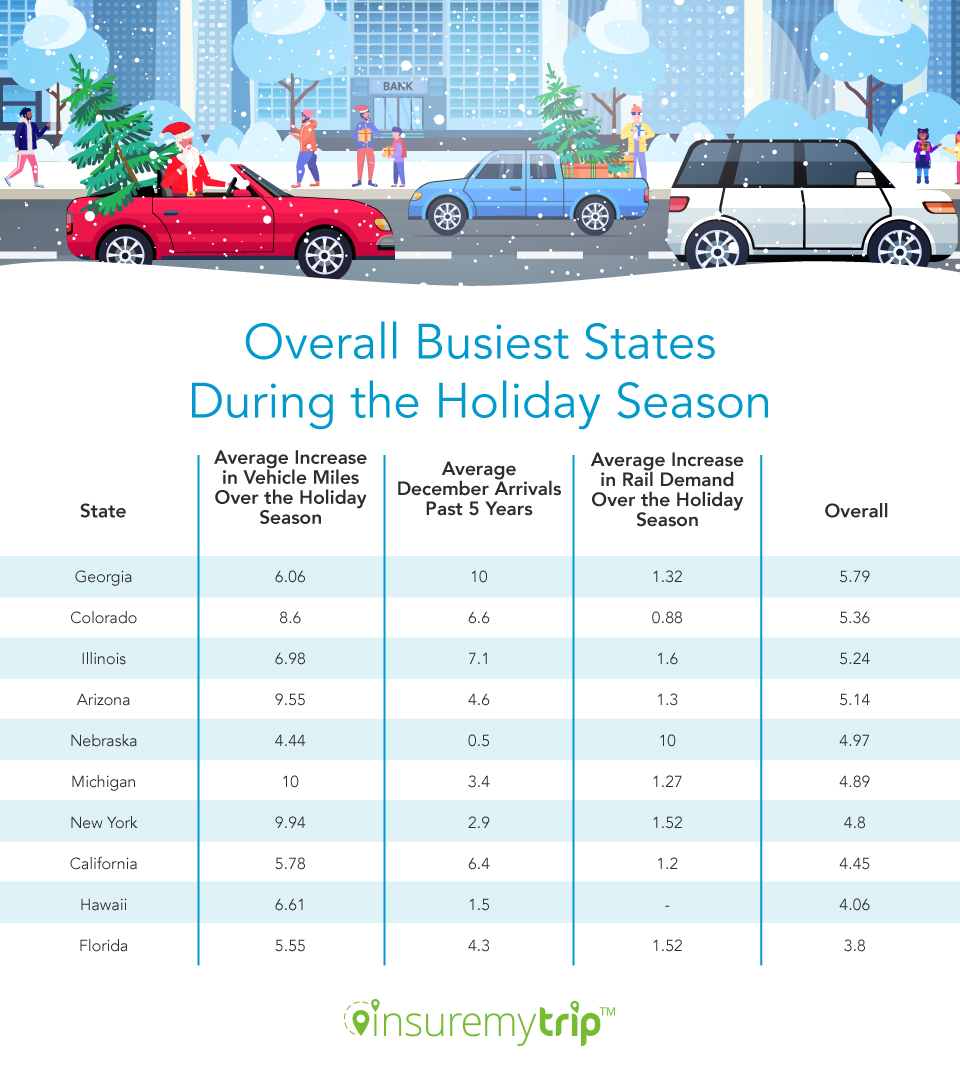 The top five busiest states during the month of December are:

Georgia is well known for having one of the busiest international airports in the world, but road traffic has also increased significantly. If you are planning travel to or through Georgia, it seems rail would be the most sensible given the reported crowd volume.

In fact, travel by train seems to be the quietest form of transportation for almost all of the top five busiest states. The only exception is Nebraska, whose rail travel levels are the highest of the three transportation method examined. 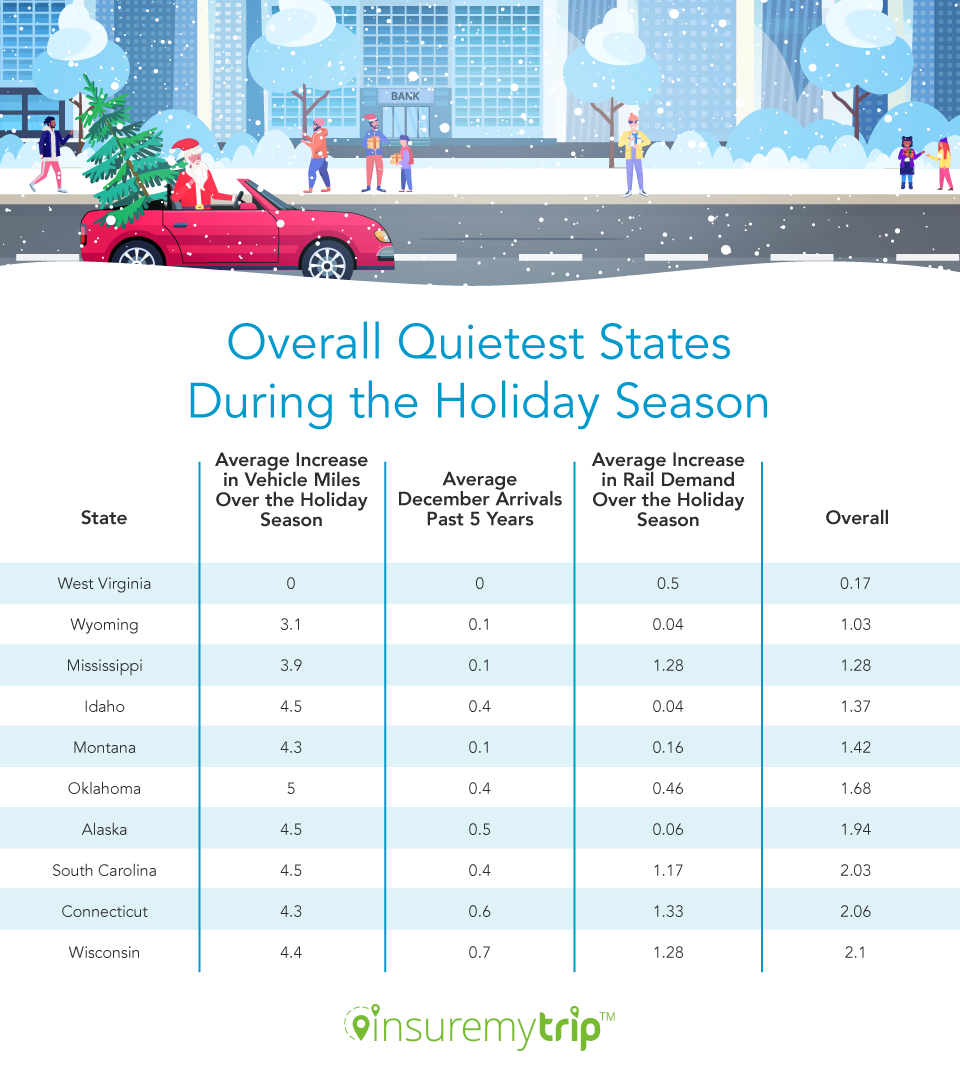 The top five quietest states during December are:

West Virginia shows no increase in road traffic or train demand over the holiday season, while there is also limited demand for trains into the state. However, train travel does appear to be the busiest travel method over the holidays.

Comparatively, the other four of the five quietest states show travel via car to be the busiest option when traveling through the state.

The Busiest States to Drive Through During the Holiday Season 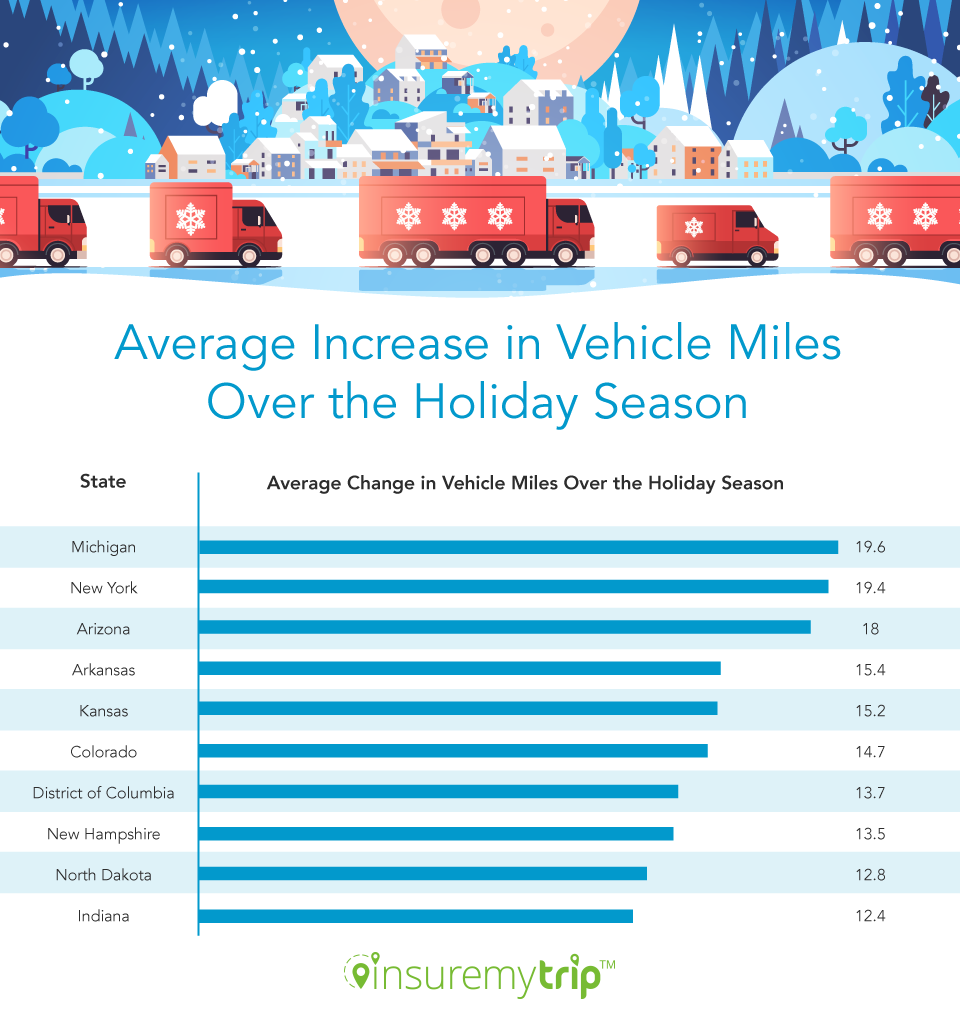 The Quietest States to Drive Through During the Holiday Season 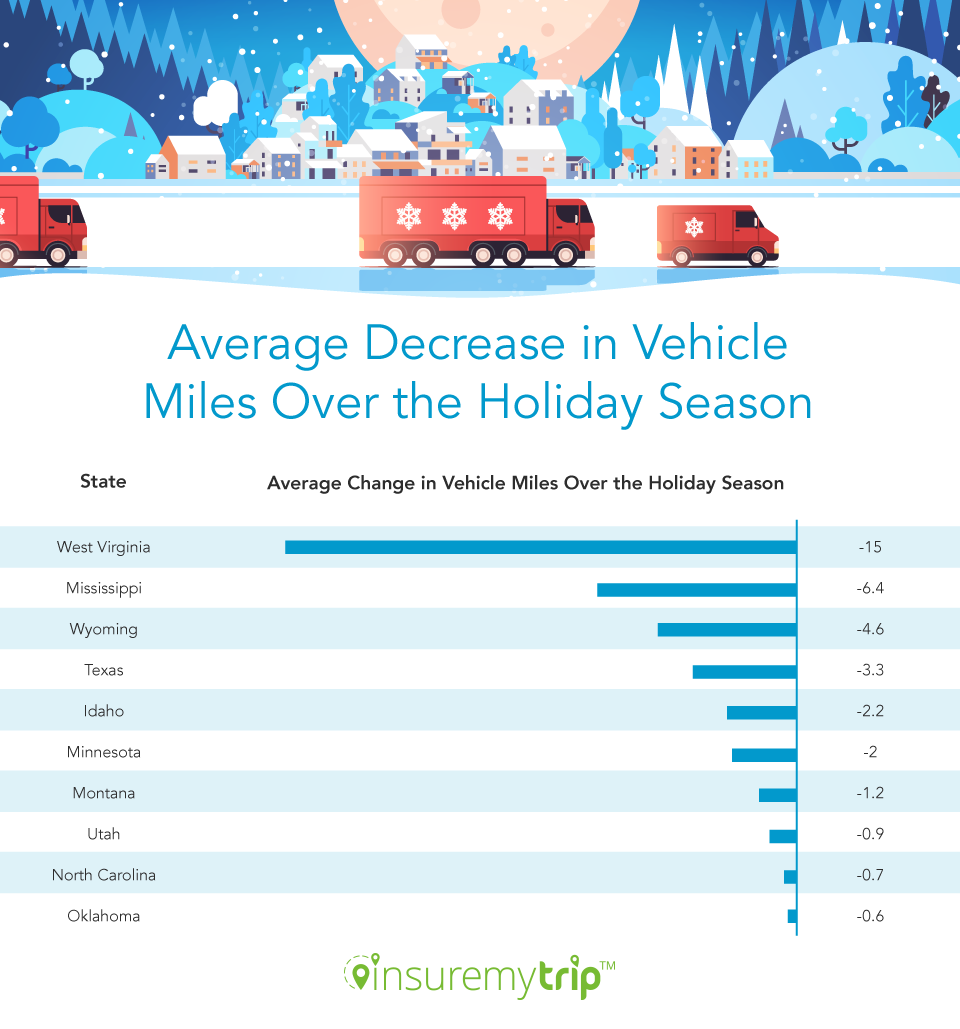 The Busiest States to Fly to Over the Holidays 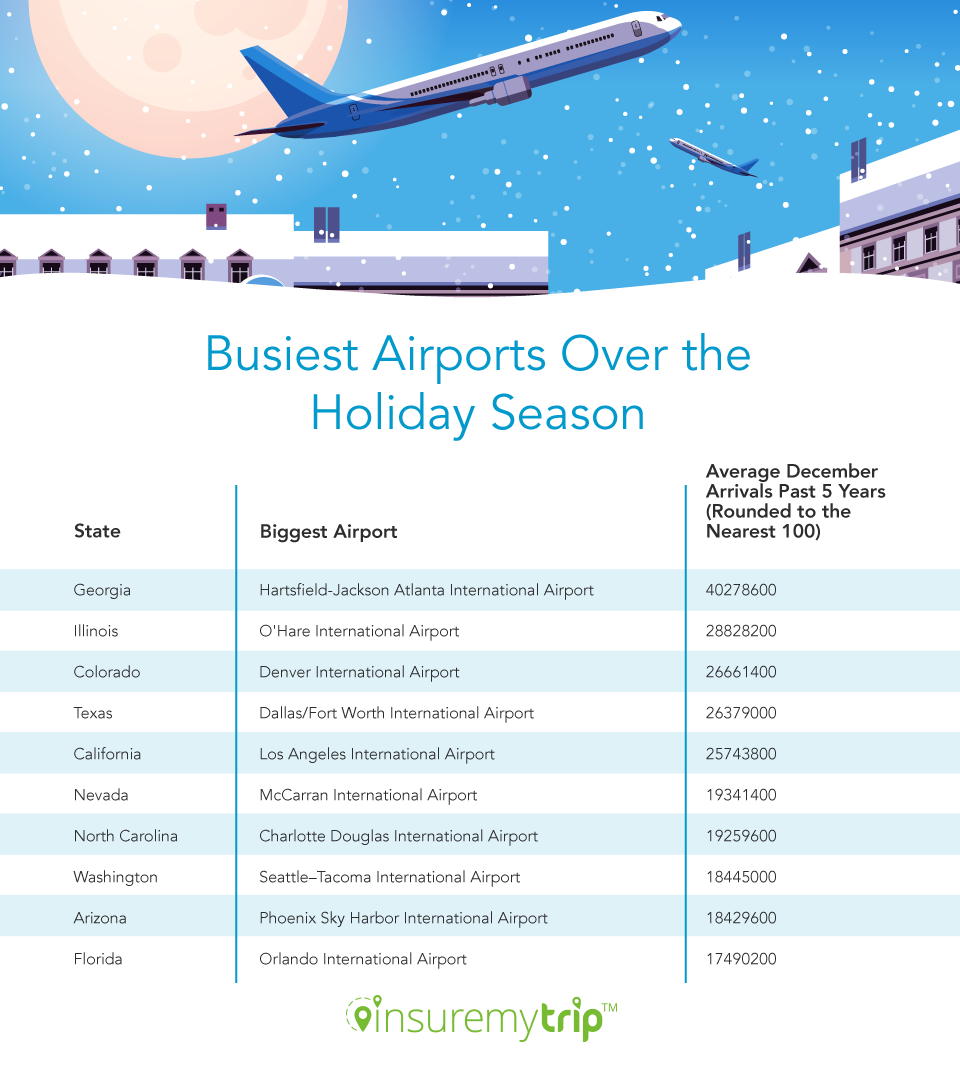 Hartsfield-Jackson Atlanta International Airport in Georgia is the busiest airport in the U.S. for December arrivals, which is not a surprise as it is well known as being one of the busiest airports in the world. On average, over for the past five years, there have been 40,278,600 arrivals each December.

The Quietest States to Fly to Over the Holidays 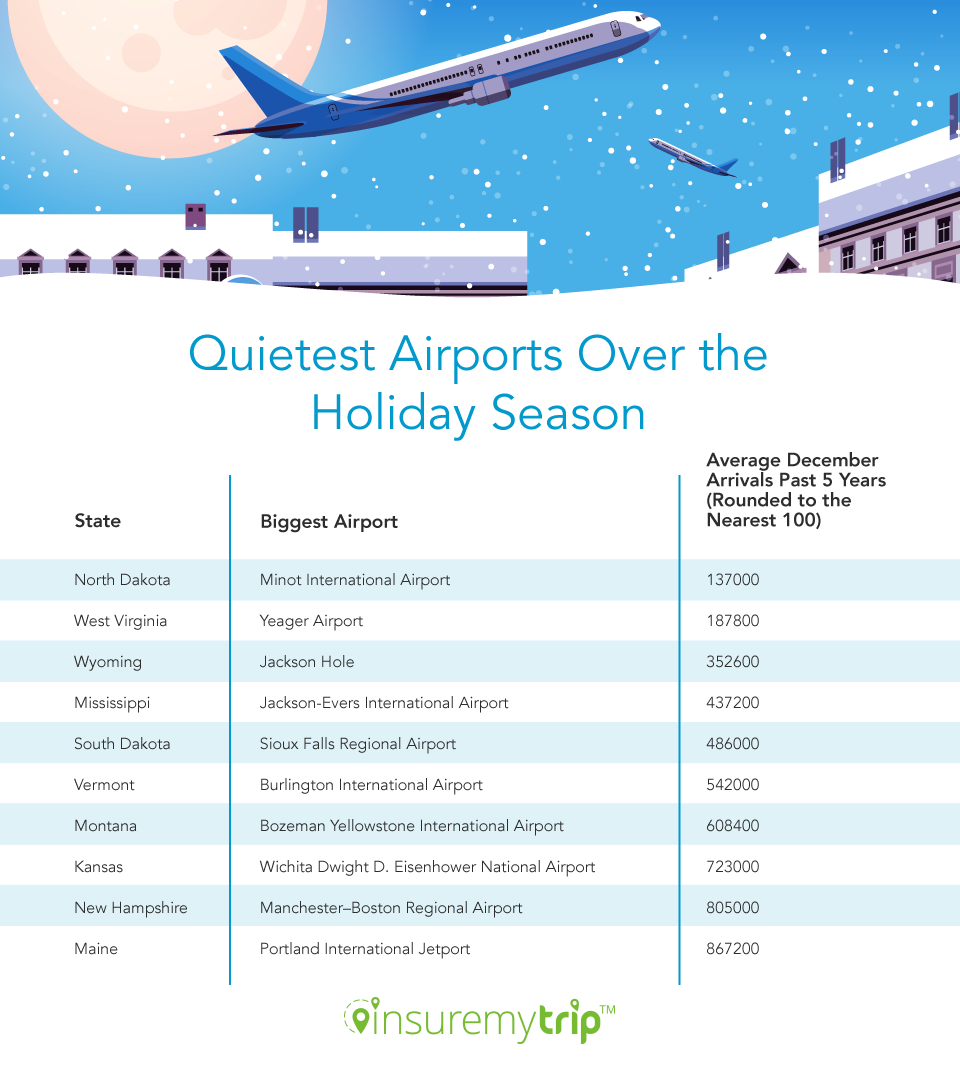 The quietest airport during the holiday season is Minot International Airport in North Dakota, with an average of just 137,000 arrivals over the past five Decembers.

The Busiest States for Train Service Over the Holidays 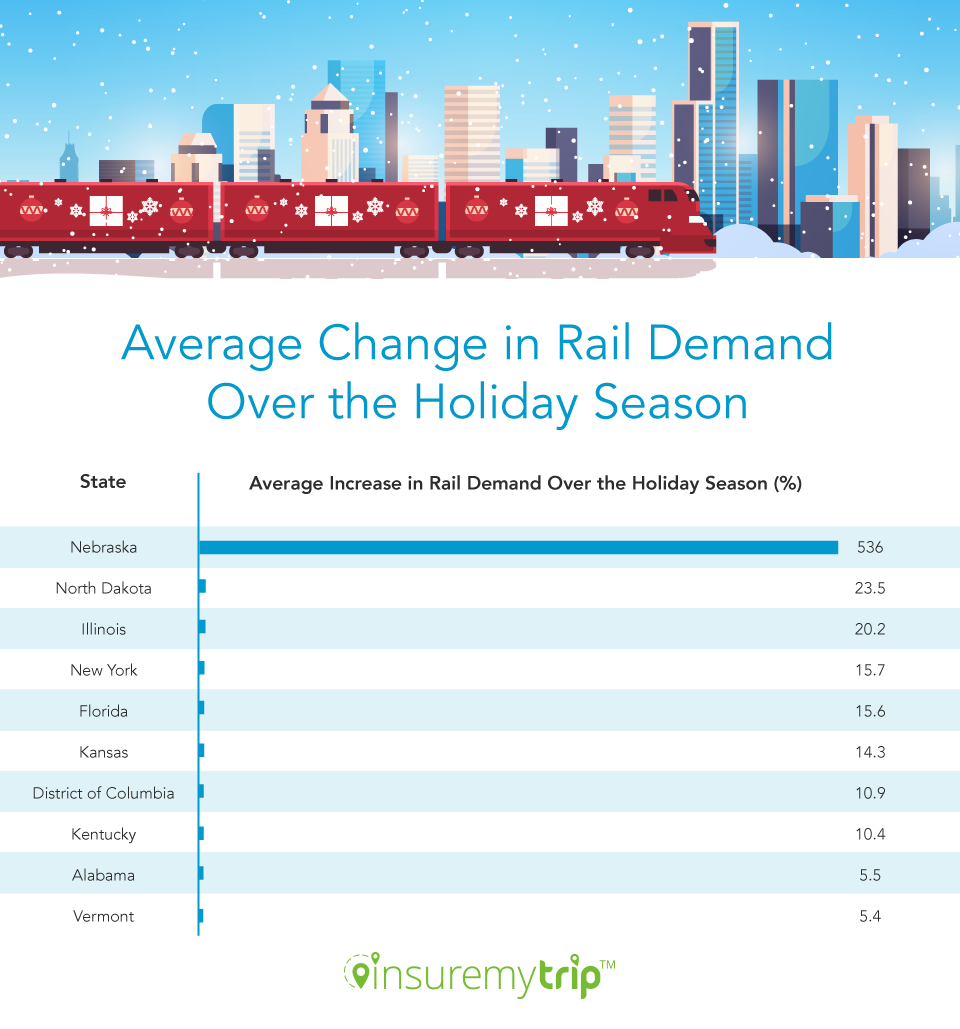 Nebraska has seen a 536% increase in demand for travel via train over the past five holiday seasons, much higher than any other state. North Dakota, Illinois, New York and Florida make up the remaining top five busiest states for train travel.

The Quietest States for Train Service Over the Holidays 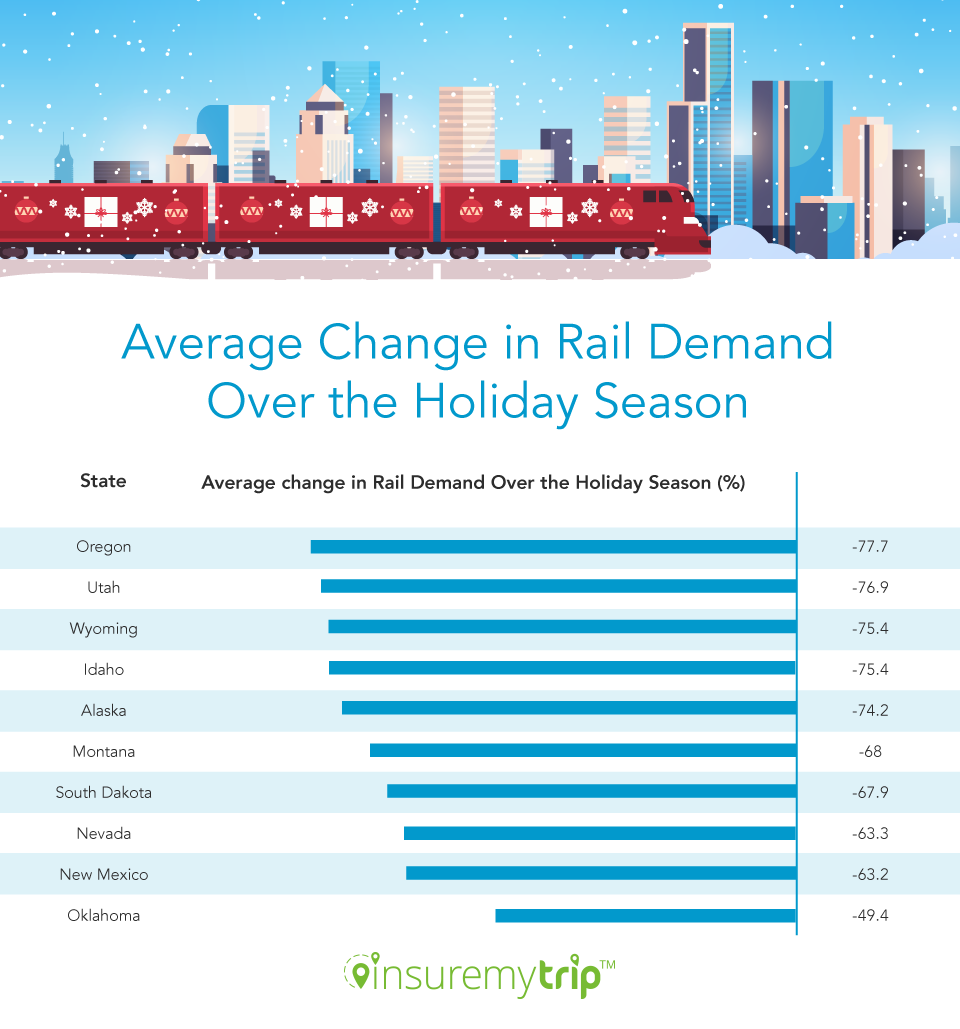 Oregon has the least demand for rail travel over the holidays, with searches for trains to the state decreasing 77.7% during the December period.

Travel during the holiday season can be stressful, particularly you’re unsure what the traffic will look like when crossing state lines. While we cannot advise you on which roads to take, or train lines to avoid, we hope this guide has provided some insight as to which states might delay your journey. No matter where your travels take you during the holidays, remember to check the restrictions and requirements of each state you will be passing through for COVID-19 restrictions and guidance.

Each data point consists of the latest research available from reputable sources. The data was standardized using minmax normalization. The minmax normalization value is multiplied by 10 to create a score (between 0-10). A score of 10 is always the best result, while a score of 0 is the worst. Each city is then ranked on their overall average rating across all data points which includes both city-level data and one country-level data point. 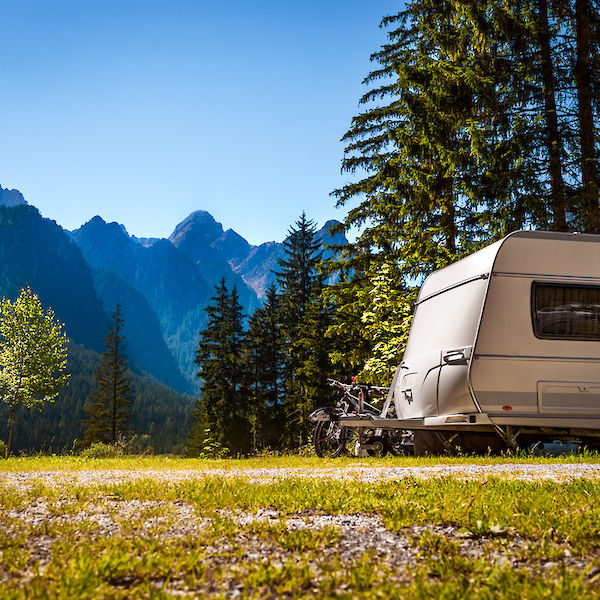 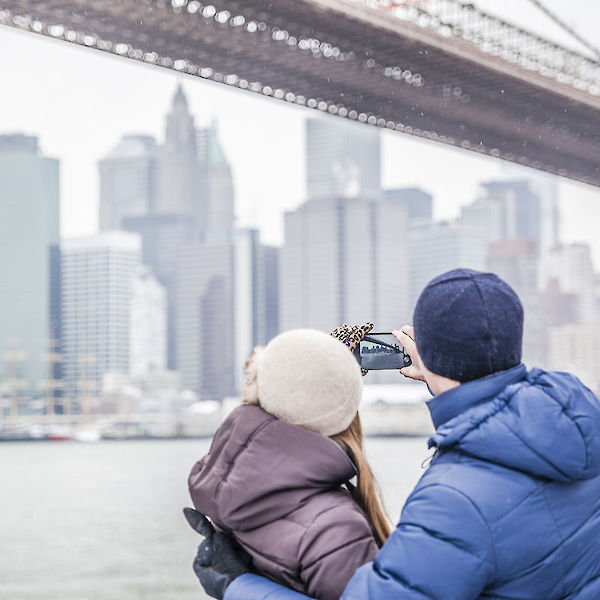 What is Holiday Insurance?